'THE Public Orator's speech was 'a bit like a review in Poetry Tyneside'.' (Poet Philip Larkin, quoted by Alan Bennett).
Posted by Tynebard at Wednesday, October 28, 2009

So, where is the pit shaft, that tall
Column of darkness driven
Hard into the ground to support
The earth, having been riven
Open, its integrity prised
Roughly apart and compromised?


An absolute blackness beneath,
Hewn from the coal and left deep,
Deep down, packed in long galleries
Allowed to settle, to keep
It just in mind, but out of sight,
Where it cannot pollute the light.


Bare hands belonging bare bodies,
Draped only in sweat and dust,
Long since committed to the ground,
Their tunnels sealed, the earth’s crust
Healing, covering up lives spent,
Earning remission for the rent.


And yet, pressed in solid darkness
Must be feint indentures, fragments
Of stories, fine fossils of tales
Untongued for years. Time relents
When memories of old pitmen
And their ways are unearthed again.


Not that many folk care to dig
Too deeply, the past’s deceased,
Better build the new estate. But,
There should be a plaque at least,
A blue one, like a lump of coal
Caught under skin, a miner’s mole.

Verse has myriad forms and purposes. The rhymed couplet written as a celebratory incantation serves as an accessible confection for a publication not actually concerned with poetry. “When the Ball Moves” is a fanzine dedicated to the promotion, in all senses of the word, of Burnley Football Club. In May the team achieved elevation to England’s top division for the first time in over three decades. This happened the day after Newcastle United confirmed their own relegation, a club whose supporters have been bedevilled by frustrated ambition. “Dare to Dream” was the slogan the Clarets took into the Play-Off final: I recommend it to all “Maggies”.


Losing once again to a lesser team,
How many Clarets really dared to dream
Or even entertain the wild notion
That the season might end with promotion?
How many, at kick off, on the first day
Thought it the first step along Wembley Way?
How many already saw their chance gone
When, by full time, they had lost four to one?
The grail of promotion, all fans seek it,
Yet, for fear of hubris, they won’t speak it.
An ill-judged boast and all hopes start to pale;
For the gods punish hubris without fail.
Those supporters who attempt to intrigue
Against fate by being confident the league
Can be all but won by Christmas, find pride
Punished with a sharp series of Yuletide
Defeats by teams that are the negation
Of success; just missing relegation
Their lone ambition. When the season’s done,
When promotion has finally been won,
When scarves and flags have flown, when the fuss,
The chanting, cheering, the open-top bus
Has bourn its soccer demi-urges through
Thronged streets surging with Claret and Blue,
When that joy has flowed and ebbed, then reason
Will turn boldly towards the next season.
Reason enough for season ticket sales
To soar like expectations, since the grail’s
Quest needs one last triumph: the precious cup
To be won now is to toast staying up.
Doom-sayers must be baulked and defeated;
Seventeenth spot and success is completed.
So, quickly let the first new kick off come,
So, let the Britannia Stadium
Ring with Claret anthems as the mission
Commences, with partisan ambition
For victory in the season to come.
Faith, like that which sped ships to Ilium,
A campaign seemingly of daunting size
Makes all the more valuable the final prize
And legends of those who fought for the cause,
Who, for their lifetimes, will receive applause
Whenever they can return to Turf Moor.
Tales will be told of them, a whole folklore
Passing parent to child; they will belong
In the annals, names recorded in song,
Glossy portraits gracing histories still
To be written. But, none of this until
That first whistle blows, then, when the ball moves,
Anticipation simmered beneath rooves
Of every Burnley abode will, by choice,
Discover its proud Claret and Blue voice.
No matter the final destination
Nothing can take away the elation
Of that brilliant afternoon in May
Ensuring BFC would have its day.
Dare to dream, but the dream cannot mask
The daunting enormity of the task.
Yet a town, whose population it seems
Could sit with the Theatre of Dreams,
Is where dreams and reality converge
And long dormant ambitions emerge.
Where claret is the dominant fashion
What’s missing in money is by passion
Made up. What message does such passion send?
“Coyle is God” is the popular legend.
But, football is football, not religion,
Though who can doubt that Owen the pigeon
Was a carrier of good fortune when
Half the gathered town rose up as one,
When the other half held its breath, and then
Commentators confirmed, “GOAL!”. commotion!
Acclaimed realisation! Promotion
Had at long, long last been truly sighted
And, on that day, Burnley was united.
Even people who steadfastly professed
Disinterest in football at best, confessed
Their rudimentary loyalty sated
By that goal: even they were elated.
Burnley will be impossible to ignore
When the Theatre of Dreams comes to Turf Moor.
Let the Longside sing, the Bee Hole acclaim
This is a new season, a whole new game. 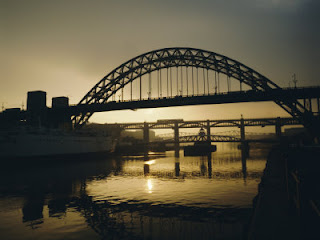 Shortly after moving to the North East from Lancashire in 1971 I became associated with the Tyneside Poets. My first experience of seeing one of my poems in print was in "Poetry North East", then the regular journal for this group. I don't suppose I then thought this would lead to nearly four decades of writing. Presently, I am concentrating on combining my love of folk music, folk tales and legends with my writing through writing a series of narrative poems based on traditional stories from around the UK. These are being regularly podcasted by "Folkcast", so I can be heard reading them at http://www.folkcast.co.uk/ betraying my Lancashire roots with the accent. The latest one concerns a story from Northumberland.

Not so very far from Rothbury town in Northumberland,
The canny folk of Simonside won’t stray abroad unplanned
Into the hills when night and mist might make the way unseen
Where just one mistaken step can be into a ravine.

Strangers indeed are well advised to stay away at night
And not to try and cross the moor even in full moon light
Yet being still late afternoon when a young man’s car broke down
He left his wheels to cross the hills to get to Rothbury town.

He should have been there by sunset, but then he lost his way
And all his self-belief faded with the last light of day,
A shepherd might have recognised a peak, a stream, a track,
But this young man could not make out a way forward or back.

So finally he felt it wise to find some sheltered place,
Until the dark had slipped away and the sun showed its face,
When suddenly, to his surprise, an unexpected light,
Faintly glimmered not far away, an answer to his plight.

“Perhaps it is some shepherd’s hut and I might shelter there.”
He said to himself with hope, dispelling bleak black despair.
At last he found the wooden shack roofed over with thick sods,
Within a little fire flickered: a palace for the gods!

On entering he found himself to be in there alone,
And either side of the modest fire stood a rough hewn stone,
By the side of one a pile of sticks lay upon strewn straw,
Lying next to the other two sturdy gateposts he saw.

Sitting himself on one stone, feeding sticks into the flames,
He thought he heard a strange sound, or was it wind playing games?
Then to his utter disbelief, terror and amazement,
An evil looking dwarf came in, all twisted, gnarled and bent.

Trousers and coat made of moleskins, his clogs were two lambs skulls,
Fur for his hat was from fox pups, killed in one of his culls.
Strode in without a greeting and sat on the other stone,
An evil glint in his eye chilled the young man to the bone.

The goblin stared and scowled and sneered, but never spoke a word,
While in his memory from childhood the wary young man heard
His gran telling of travellers being lost beneath moon and star
In the hills by Simonside must beware of the Duegar.

“Do nothing to offend him for he means mortals great harm,
There is no protection against him, no magic, no charm.
If he’s given the slightest cause into a rage he’ll fly,
The only way to hold him back is look him in the eye.”

“Thanks Gran.” He muttered to himself, “I’ll not provoke his ire.”
And reaching down he picked up sticks to feed the fading fire.
The Deugar gave a disdainful snort as effortlessly
He snatched up a thick gatepost and broke it over his knee.

Threw both pieces on the fire which surely stopped it dwindling,
Then looked up as if to say, “A child can snap thin kindling.
Now you pick up the other post, break it and show some pride!”
But the young man made no such move and never looked aside.

By and by the fire died down but the man maintained his stare,
The room grew darker and darker and oh so cold in there.
The Duegar continued scowling, a challenge in his eyes,
“Come and get the gatepost and feed the fire before it dies.

“For, if there’s total darkness you’ll not be able to see,
Then, completely blind, you will be alone in here with me.”
Although the words sounded clear and he heard all that was said,
The Duegar never spoke, it was all in the young man’s head.

So he kept his silent gaze, he would see that long night through,
The room became ever gloomier, yet the young man knew
That the dawn was approaching, it could not be far away,
And he certainly would be safe once came the light of day.

He began to feel so tired and his eyelids weighted with lead,
“There’s a straw bed in yon corner, go and rest your nodding head.”
The Duegar sounded solicitous, words sonorous and deep,
“Why not leave that hard stone chair and lie yourself down and sleep, sleep.”

He tried so hard to stay awake, but as the feint flames faded
His eyes seemed oh so heavy and his will to fight felt jaded.
Blearily, through narrow slits, he saw the Duegar start to smile,
An evil grin that betrayed a soul that was both bleak and vile.

There were only embers left and the fire was almost out,
The darkness was pressing in as shadows gathered about,
When through the door, from the distant east, came a pale grey light,
At once the Duegar, the hut and fire, vanished from his sight,

By dawn’s illumination he saw, and felt heartbeats miss,
The stone on which he perched was the peak of a precipice,
And he knew that had he tried to do what the Duegar willed
He’d have plummeted to rocks below and certainly killed. 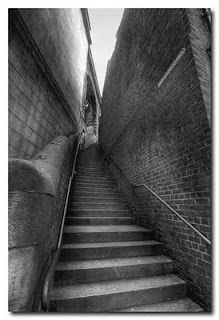