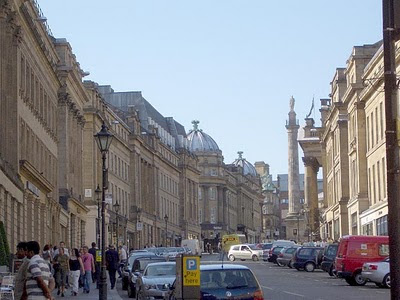 She welcomes with a smile as wide as the Tyne:
This city celebrates different voices.
Her daughters sold clothes, second-hand at Sandgate
as the boats sailed like long-lost lovers into Dean Street,
keeping their promise.
Reborn, her lassie sings a brand new song,
silencing the battalion of buses
that bully past the building societies,
while the lads that once danced for their daddies
push bairns in buggies, with one hand.
And still, people remain puddled
by the play of her spirited, underground rivers
that flow, like lifeblood right up to Spital Tongues.
She is a carnival of bridges skinning a heron-coloured sky.
Flooded with pride, she lands her logo
like kisses, on lamp-posts in Grey Street.
Catherine Graham


Dad
Sometimes he'd bring home
samples
of brand new chocolate bars
and mis-shaped
wafer biscuits in a silvery tin.
His big delivery van
would roll up
onto the cobbles and mmm
the smell of Rowntrees jelly
on his tall brown gaberdine.
Catherine Graham
Posted by Tynebard at Monday, May 31, 2010

the sun is hanging low in the november night
and the winter wind is hitting me hard
i think of my gorgeous goddess
and only warmth is what i feel and i think of you
then my whole day seems brighter than 1000 solar systems
and you make me a better man
when i hear your angelic voice it makes me realise
how lucky i am
speaking to a goddess
my goddess
and you've helped me in so many ways
so this is something in return
Thomas Alexander - David Williams
Posted by Tynebard at Monday, May 31, 2010


Prickly grass
perilous edge to the street below
and tiny people.
All bones beneath me;
ghosts and memories.


Summer days when the
rich met
Sunday mornings; church steps.
The sweep to the Tyne
(blood in our veins)
The dome of the circle
and rounded pews.


Pink tinged sky for vespers
As carraiges roll by
down to the quay.


I was the middle of the town,
Up line or down
They gathered round,
Shopkeeper, newsboy, knowing best
Where served their human interest.
Less central by far,
Library, Church or Cinema
Claiming their special congregation,
But thy came and left from the
Railway Station.


Build me then of monumental stuff,
Only the best is good enough,
Wrought iron, brass, teak and stone,
For I am middle of your town,
Robing with rich and noble feature,
All your arrival and departure,
Your fond greeting and sad farewell,
Like the son who left for Passchendale.
And here his mother stood,
For only at this place
Could they ever meet again
Or else in heaven.

It’s just the wrong angle for the bow saw,
With a new blue-steel blade tempered and tensed,
For it to rip into the still wet flesh
Of the forsythia lopped to a stump.
Father and son debating the best way
When granddad brings an old short-shafted axe
Pitted with rust from two generations
Of non-use, corroded, but still quite keen.
Both father and son weigh, heft and wield it
Each in turn, hacking into sap bleeding
Rump and root of the shrub, sharing the thrill
Of thoughtless, brutal labour. Afterwards,
Father discovers the axe is but one
Of so many immemorial tools
His own granddad employed with craftsman’s guile,
Making the red wooden pull-along train,
Loco and tender: Bang-bang granddad who
Was struck from life and memory of his
Four years old grandson by the rap of the
Policeman’s knuckles hard on the front door,
Reluctant harbinger bringing dire news
Of the real train and the dead platelayer.
The old axe, with due diligence, severed
Stump and root from the earth, leaving an absence
Along the line of bushes and bedding plants;
And father knowing he doesn’t have the craft
To employ those venerable tools to fashion
Some wooden toy that might become well loved
By his own grandchild still in gestation,
But who may, one day, also forget him.

Certainly morning must be deaf to me,
While streets and streets are tumbling with litter,
Headlamps are bright as the song of a thrush
Sung while trees hold hard a moon over the road.

There can be no suggestion I appeared,
With too few letters being written on ice.
An obscure church clock finds time for echoes
As if dumb office blocks are all bell towers.

Although CCTV pays me no heed
That very blindness causes me to worry.
Should pavements split open spewing lava,
Who’d stop shadows being incinerated?

Clouds must not be allowed to rain my name
To shatter on kerbstones, run in gutters.
Bankers, behind closed doors, are at a loss
As the red shift measures out distances.

Now’s the time to slam books of poetry
And make libraries crematoria.
From dust and ash and the spit off my tongue
I’ll mould a golem, then refuse it life.

First glimmer of light betrays the darkness,
Memories collectively forget dreams,
Dissembled church, ringing with silence, allows
That I might slip away quite unnoticed.

Two poems from the archives of The Tyneside Poets

Along this beach, Mastodon traces still
in sand.

A single cloud, one bruise I can feel
swelling behind my brows.

The denim-blue Ocean gives up its garbage,
white as a blind man’s eye; cratewood, flint beads and khaki weed,
a dead seal buffeted by the tide, like a
lost kid suitcase.

Time waits, bottle-wise for every man, it
finds us here drunk and windswept, the
daylight itching like sand-mites in each
other’s eyes.

The distinctive canvas of that racing
yacht is not so now;
becoming one with the Danish coastline,
or is it Germany, that transparent blue-
skin of rock?

Seals are gutted and their pelts salted and
keel-hauled:

the sun cooks blisters on my thighs and
back wine slops from my flask,
blood from a gash.”

Day breaks with the resonant clatter
of dustbins being emptied;
the unintelligible chatter of milk bottles
and the tuneless solo of a vacuum cleaner.
There is the breaking and revving,
the coming and going,
the greeting and objecting,
of delivery vans.
The vague orchestra of traffic
unfolds, gathering momentum,
as the non-winners of the football pools
seethe into the non-enthusiasm
of a new day.

Pout-chested pigeons pick
Their way through garbage
That litters pathetic plots
Of sour earth.
And soot-stained privet,
Plastic to the touch,
Struggles in vain and fails
To decorate or brighten
The crumbling decay
Of once fine buildings.
Threadbare is the corpse,
Its rotting rafter bones
Protude from tileless roofs
And corrugated sheeting shutters its eyes.
A diesel like a death watch beetle
Scuttles past
Disturbing the twitching sleep
Of the dying geriatric.
Yet human life,
Like a maggot in a carcass,
Nibbles away at existence,
Viewing with alarmed suspicion
Footfalls and voices
That ring hollow through the tomb.
Faded curtains twitch
And the mad eye of the lonely
Peers through stained glass windows.
And the mad brain of the lonely
Atrophies
In fear of that fatal knock.