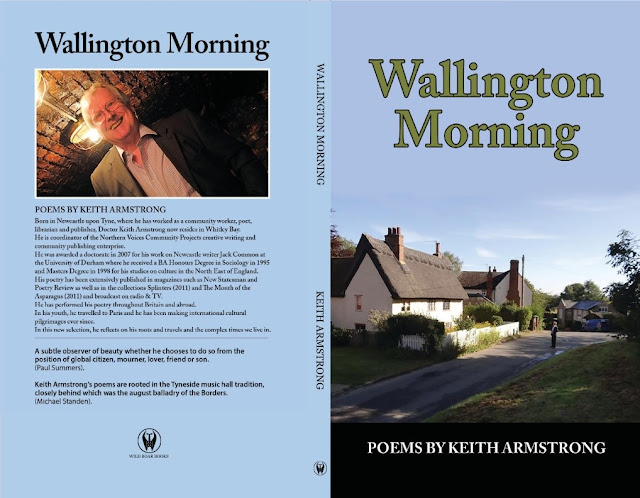 Long, long was a year to the child,
Yet so quickly ninety passed by
It seems, how nine decades can fly,
As if life itself so beguiled
By living, that time being compiled
Was barely noticed. Just how sly
The clock in its counting, how “I”
Lives on in long memories filed.
Ninety years are a goodly sum,
Trumping scripture’s ordinance,
Too many friends already passed
And a husband who has become
A still raw absence. Fate or chance?
Whichever, this life has been cast.

FOR MY MOTHER AND FATHER 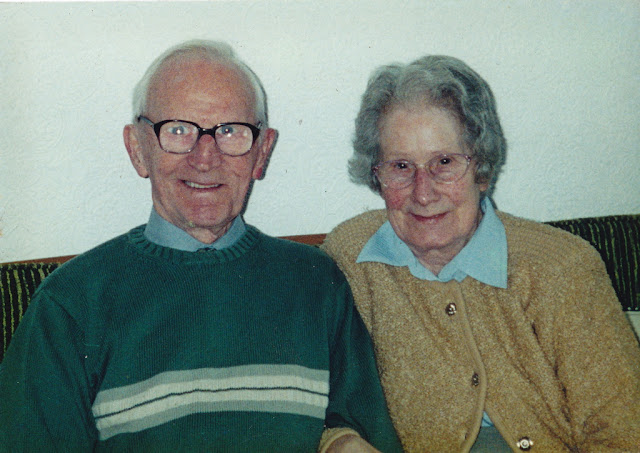 THE BIRD WOMAN OF WHITLEY BAY


She is out feeding the birds,
on the dot again,
in the drizzle of a seaside morning;
the seed
cast fom her hand
to the jerking beak of a cock pheasant.

She is alone
in a flock of dark starlings,
scattering crumbs to make them shriek.

She is a friend of spuggies,
gives blackbirds water.

Her eyes fly across the garden
to catch a quick robin,
to spot a wee wren,
to chase a bold magpie.

She is innocence,
she is a lovely old lady;
still giving,
still nursing.

She deserves heaven,
she deserves a beautiful nest
to dream out her last hours
in bird song;
in the rich colours of music,
in the red feathers of sunset,
she is my mother,
she is a rare bird
who fed me beautiful dreams.

Thank you for letting me climb
with the skylarks.

Thank you
for the strength of wings.

You picked splinters
with a pin each day
from under blackened fingernails;
shreds of metal
from the shipyard grime,
minute memories of days swept by:
the dusty remnants of a life
spent in the shadow of the sea;
the tears in your shattered eyes
at the end of work.
And your hands were strong,
so sensitive and capable
of building boats
and nursing roses;
a kind and gentle man
who never hurt a soul,
the sort of quiet knackered man
who built a nation.
Dad, I watched your ashes float away
down to the ocean bed
and in each splinter
I saw your caring eyes
and gracious smile.

I think of your strong silence every day
and I am full of you,
the waves you scaled,
and all the sleeping Tyneside streets
you taught me to dance my fleeting feet along.

When I fly, you are with me.
I see your fine face
in sun-kissed clouds
and in the gold ring on my finger,
and in the heaving crowd on Saturday,
and in the lung of Grainger Market,
and in the ancient breath
of our own Newcastle.


‘This is one of the poems I'll never forget. I see the struggling of my own dad in your words.
Thanks for your fine poem.’ (Klaas Drenth) 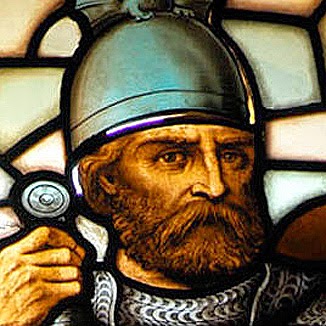 On 23rd August 1305, William Wallace was executed. At that time, the punishment for the crime of treason was that the convicted traitor was dragged to the place of execution, hanged by the neck (but not until he was dead), and disembowelled (or drawn) while still alive. His entrails were burned before his eyes, he was decapitated and his body was divided into four parts (or quartered). Accordingly, this was Wallace's fate. His head was impaled on a spike and displayed at London Bridge, his right arm on the bridge at Newcastle upon Tyne, his left arm at Berwick, his right leg at Perth, and the left leg at Aberdeen. Edward may have believed that with Wallace's capture and execution, he had at last broken the spirit of the Scots. He was wrong. By executing Wallace so barbarically, Edward had martyred a popular Scots military leader and fired the Scottish people's determination to be free.

Wave goodbye ye oafs of culture,
let your rootless dreams drift away.
History has come to drown you in blood
and wash up your empty schemes.

Yon tottering Palaces of Culture
are seized by the rampaging sea.
They are sailing back to the Equator
to burn in a jungle of fear.

Three hundred million years me lads,
unseen from these high rise days:
an ice sheet thick as an ocean,
all those hours just melted down.

Into rich seams of coal,
tropical plants were fossilised;
the sandbanks grew into sandstone
and the mudflats into shale.

And the right arm of William Wallace
shakes with wrath in this firework night.
It is waving goodbye to your history,
it is saying hello to Baghdad.

All the brains of your Labour Party
are stashed in a carrier bag.
Down Bottle Bank in the darkness,
you can hear Wallace scream in a dog.

And will you hang, draw, and quarter my home street?
Will you drop bombs on the music hall?
You have taken the bones from our loves
and taken the piss from the Tyne.

So give me your arm Good Sir Braveheart,
I’ll take it a walk through the park
and I’ll use it to strike down a student
with an empty shell of a soul.

And I’d give my right arm to make ships,
my left to stoke dreams alive.
And I will dance on in the brilliance of life
until oppression is blown away. 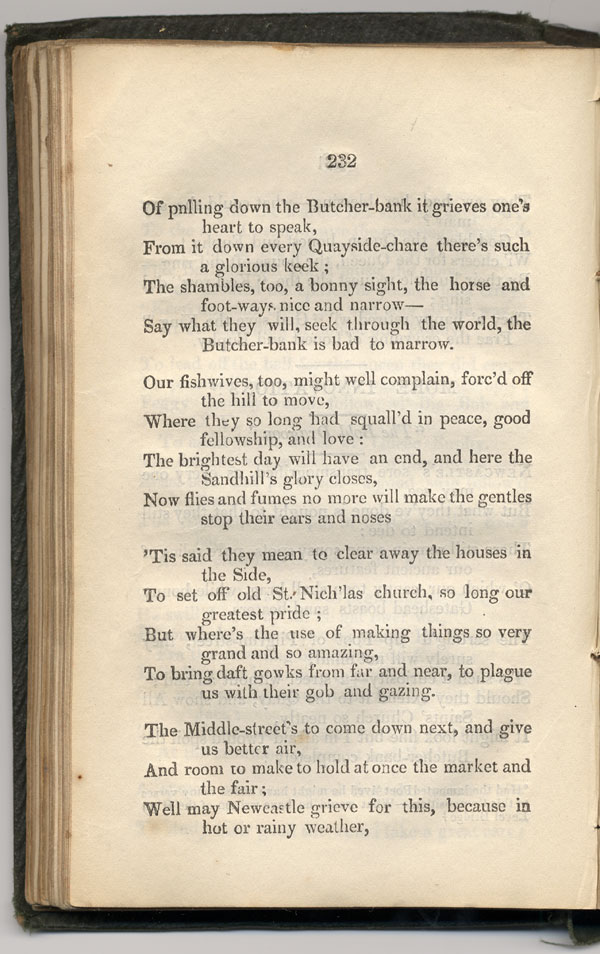 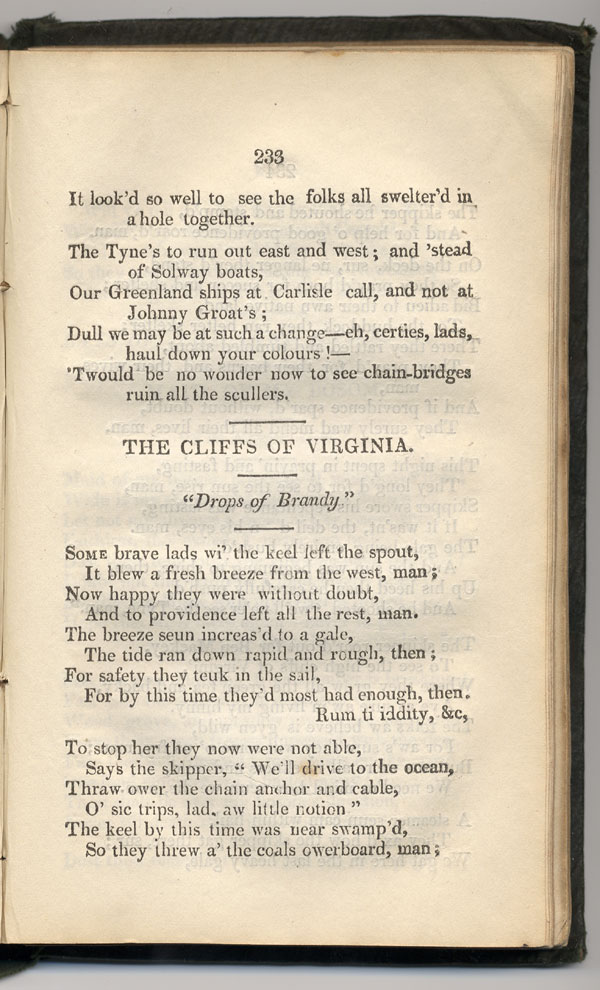 Robert Gilchrist was born in St Mary’s Parish in Gateshead on 8th September 1797. His father was a sailmaker, part owner of Payne & Gilchrist sailmakers, before becoming head proprietor. After Robert finished school he was apprenticed to William Spence, sailmaker, before working in the family business.

Robert started writing poetry from a young age and found support in a thirving local community of poets, songsters and bards. He gained the friendship of Thomas Thompson (1773-1816), who was considered to be one of the finest and earliest Newcastle poets. Gilchrist was held in high regard. In 1818, at the age of 21, he received a silver medal from his companions in appreciation of his poetry. His special place amongst the community was recorded in the song ‘Thumping Luck to Yon Town’, by painter and politician William Watson. Watson notes Gilchrist’s “comic song” amidst the wit and humour of notable others such as Thompson and William Mitford.

A number of Gilchrist’s poems and songs were published, lending him a degree of local fame. Gilchrist's first book-length poem Gothalbert and Hisannawas published in 1822. In 1824 his Collection of Original Songs, Local and Sentimental was published by W.A. Mitchell. A second edition followed in the same year, with the title altered slightly to A Collection of Original Local Songs, and the addition of an extra poem, ‘The Loss of the Ovington’. Poems, a collection of eighty-four verses, followed in 1826 published by W. Boag. In all, Gilchrist’s published output of songs and poetry numbered over a hundred separate and original pieces, appearing in these collections and in the local press, including: The Newcastle Journal; Tyne Mercury;The Newcastle Courantand  Newcastle Magazine. Many of Gilchrist’s songs, drawn from his 1824 Collection of Original Songs, Local and Sentimental, upon which a biographer noted his fame largely rested, were republished in local anthologies in his own lifetime and beyond. These included: Fordyce's 1842 Newcastle Song Book, Joseph Robson's 1849 Songs of the Bards of the Tyne, Thomas Allan's 1862 Tyneside Songs and Readings and Joseph Crawhall’s 1888 A Beuk O’Newcassel Sangs.

Upon the death of his father, John Gilchrist, in 1829, Robert took over his father's business near the Custom House on the Quayside. He was not successful in the business preferring the country and long walking tours. Gilchrist resided in the old house facing Shieldfield Green, reputed to have housed King Charles during the English Civil War as a prisoner of the Parliamentarians. In 1838 he wrote a poem 'The humble petition of the old house in the Shield Field' to Town Clerk Mr John Clayton Esq. complaining of plans which threatened to destroy this house. The house was spared. A memorial plaque stands on Shieldfield Green to commemorate the famous inhabitants of the house, which eventally succumbed to redevelopment in the 1960s.

Gilchrist had some involvement in local politics and must have had a degree of status in Tyneside. He was a freeman, a member of the Herbage Committee, which tended Newcastle's Town Moors, and took part in the annual Barge Day event, a local custom in which the Mayor and barges representing the Town's Guilds sailed the length of the Town Corporation's boundaries on the Tyne. Following the Poor Law Reforms of 1834 and the creation of the Newcastle-upon-Tyne Poor Law Union in September 1836, Gilchrist was elected to the Board of Guardians, representing the All Saints' Parish. This role would have meant him adjudicating between deserving and undeserving poor, deciding on the fate of unfortunate individuals and families as they entered the newly constructed Newcastle Workhouse. He was involved in an inquiry into the controversial death of the pauper Elizabeth Graham in 1838; an event which garnered national press coverage.

Robert died on 11 July 1844 at the Old House in Shieldfield, aged 47, and was buried at the East Ballast Hills burial ground. The cause of death is given as a stomach cancer. John Luke Clennell, the son of the engraver and poet Luke Clennell (1781-1840), paid tribute to his old friend in the poem below, dated 16 July 1844:

If honest, manly, unpretending worth
May justly claim from us a tribute dear,
And those who were respected whilst on earth,
Deserve a passing dirge sung o’er their bier,
Then may I write me ROBERT GILCHRIST here.
No vain and empty words are these to tell
A tale of sorrow in an idle rhyme;
I knew the simple-hearted fellow well,
And felt his kindness also many a time.
Thus it is fitting memory should dwell
In pensive sadness on a man who gave
Good cause for us to sorrow o’er his grave,
And that the Muse bear record with a sigh,
When now it is the poet’s lot to die.