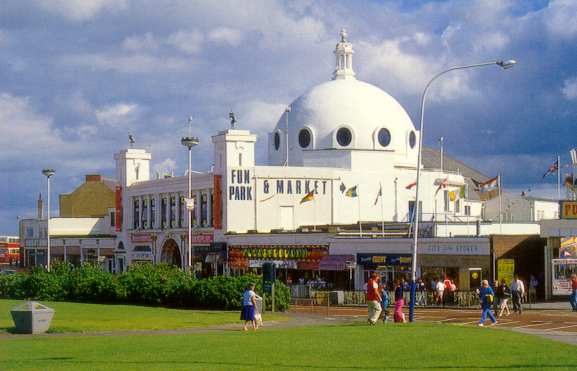 
Here I come
through Bay Fog,
gold ring glinting
in the Park Road dark.
Seeking a North Sea fortune,
looking for a tuneful lass
to make my aching skin sing
of Wooden Dollies
and Spanish Galleons,
sailing across the old fairground
to sunnier climbs.
There’s this guy in the Rockcliffe
and he looks like a ghost.
He’s as pale as the weather
amd mist drips from his nose.
He’s an Old Waltzer,
my young Uncle Walter,
and his eyes are all talk of the War.
He did his strong courting
in an Old Spanish City
and the rose he seduced
was a Cullercoats’ flame.
Now those cold bones are ready
for the warm Crematorium:
a Memorial to seconds flown by;
the joy of the candyfloss,
the hum of the summer,
the simmer of hamburgers,
and the hot suck of kisses dashed off.
And I am the dome of your past,
the breast of the future,
and I will hug your treasured snaps,
stick your faces in my locket
and spin you down my blouse.
For I have given you joy.
I have thrown you lifelines
and bobbing girls and boys.
And my Bay Wheel
keeps on turning.
My Big Heart
goes on burning.
My Sweet,
my sweet Streets,
my Catalon Whitley,
kiss me.
Kiss me.
KEITH ARMSTRONG
Posted by Tynebard at Saturday, April 24, 2010 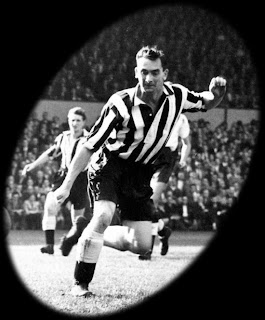 Angels Playing Football
Sprinkle my ashes on St. James’s Park,
Fragments of goals on the grass.
Hear the Gallowgate roar in the dark.
All of my dreams came to pass.

Pass me my memories,
Pass me the days,
Pass me a ball and I’ll play:

Play with the angels,
Play on their wings,
Play in the thunder and lightning.

Pass me my memories,
Pass me the days,
Pass me a ball and I’ll play:

Play with the angels,
Play on their wings,
Play in the thunder and lightning.

Some weeks before he died in 1988, the legendary Newcastle United footballer Jackie Milburn was sitting in his Ashington home with a grand-daughter on his knee. Outside, there was thunder and lightning, which frightened the wee girl: ‘What’s that noise?’, she asked her grandad anxiously. ‘Don’t worry’, ‘Wor Jackie’ replied, ‘It’s just the angels playing football.’
It was this incident which inspired the following poem, given added poignancy by the placing of an Alan Shearer shirt on the notorious Gateshead Angel’s prodigious back by local fans before the 1998 F.A. Cup Final!

Two poems from the archives of The Tyneside Poets 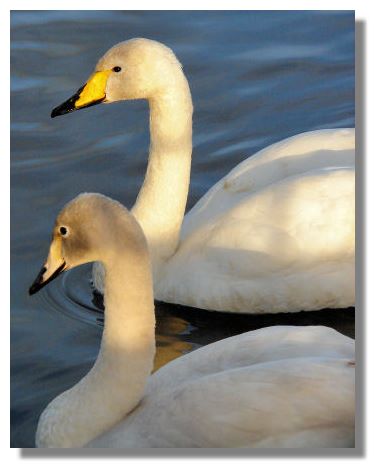 The Whooper Swans at Delaval

One night I whispered to her
In late October – “The swans are back.”
But she was asleep, and so
I threaded them on our dreams.

And since, she saw them on her way to work,
And counted – ninety at least,
All feeding in a field, and not on dreams.

Then, one cold November weekend,
Pitching heavy footsteps around the lake,
We saw them coming in –
Or rather, heard, the sound-path low
And harsh, as if some beautiful weapon approached.

Out of the dark they came, stooped low,
The backing wings hollowing the air,
Paddles feeling for the other element;
Then wave after wave, and each time
Holding back the heart so that
Its beating waited on magnificence.

They carved themselves as strong in me
As the still ponds held the ageing light
Like china in the darkened fields.
But perhaps the shape was always there –
An image in the mind from Yeats –
And needed but the borrowed sky
As manuscript for mind and sight.

For they unearthed in me a need I did not know was there,
Not just for beauty planing out of air,
But need that is the same for me as for those Northern men,
My ancestors who sailed the winds,
Who knew no need but water, sky and shelter from the ice;
And when they saw it, settled, but
Did not delude themselves their foothold held upon the earth.

The gulls rise in a white wave
from the Slake.
A plague replaces flood.
The wind blown in the wattle is
as tuneless as a trembling boy
who sings his prayers here
seven times a day;
yet holds to faith
the straw, the wood, the stone.

Here Michael stands triumphant
when
the manuscripts illuminate.
A white wave rising
from the Slake
has filled all Europe
with its Saxon light.

Become part of the new revolution,
new technology arriving every day;
hyper fast processors and touch-screen phones
and quick-fix jobs that can be thrown away.

Oh! Sorry,
we’ve now replaced you
with someone in Bombay!

Young love... delicate and fragile,
Like a spiders web.
Prone to be broken as easily
As a strand of gossamer thread.

Excitement and passion
Filling young ones’ dreams.
A kiss freezing time...
For an eternity, it seems.

Mature love... soaring like the wind
Powerful and free.
Beating in our hearts
Like the pounding of the sea.

As binding as an oath;
Held fast by the heart.
Two becoming one,
Wild horses cannot part.
Posted by Tynebard at Tuesday, April 13, 2010