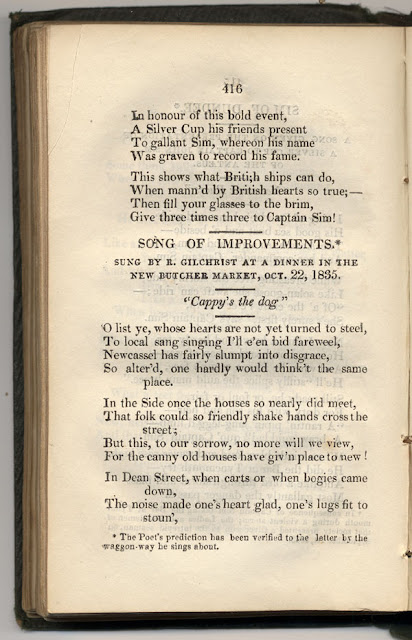 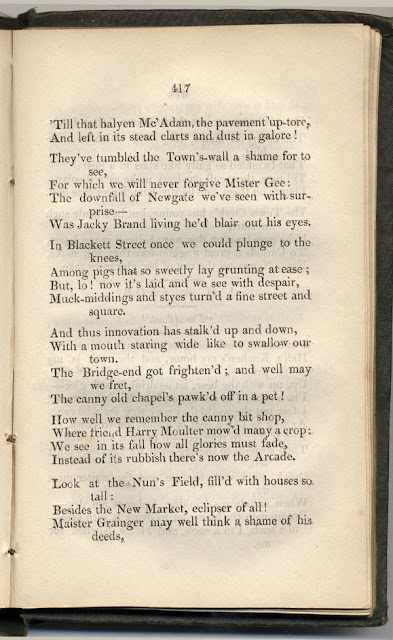 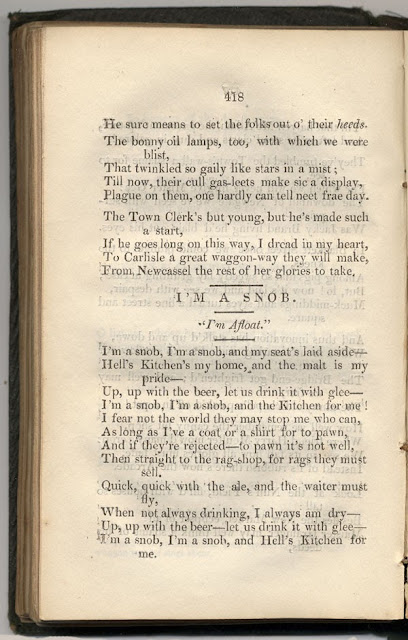 On 22 October 1835 Robert Gilchrist was present as a singer at a famous occasion in Newcastle’s history – the opening of the Grainger Market. This was considered to be the finest market in England.
The event was held to celebrate the opening of this new commercial centre as Newcastle underwent development during the 1830s through the efforts of builder Richard Grainger. A public dinner was held in which nearly 2,000 were present, including 300 ladies in a temporary gallery erected for their accommodation and that of the band. The Newcastle Journal noted that Robert Gilchrist “sung with great applause”. His song, unnamed at the time, but which would appear in Joseph Robson’s Songs of the Bards of the Tyne as ‘Song of Improvements’ was posthumously published in a shorter form entitled ‘Anti-antiquarianism’, which dealt with the redevelopment of Newcastle’s upper town.
Posted by Tynebard at Friday, June 28, 2013

Birds hurl themselves at the leaping Tyne;
I catch them through the evening window.
It is cold for the time.
My throat is stuffy with poems left unsaid.
Weary troubadour I am,
swimming with visions of ancient European tours.
Now I have landed, with my seagull wings, in Haydon Bridge
to honour a famous son.
I am lodged in the Anchor Hotel,
another lonely night of a whirlwind life:
lorries howl around me
and I can hear a village trembling
in the blinding dark.
Restlessly at anchor,
I cannot sleep for the ghost of John Martin
lighting up my room
with dynamic visions
and the thunderous clatter of his wild dreams.
Stuck in the rut of my own poetry,
I force myself to sleep,
bobbing by the river,
under the fantastic sky.
The community lights shine on my imagination,
and the screams of swifts
make a life worthwhile.

Born, Haydon Bridge; apprenticed to a Newcastle coach-painter, 1804; ran away after a dispute over wages; apprenticed to a Newcastle china-painter, Boniface Musso; moved to London and supported himself painting on china and glass whilst studying perspective and architecture; sent the Royal Academy his first pictures, 1812; became an opponent of the Royal Academy after becoming aggrieved over the hanging of his pictures in 1814 and 1816, but continued to contribute to their exhibitions; appointed historical painter to Princess Charlotte and Prince Leopold, 1817; exhibited at the British Institution, 1819-1821, including 'Belshazzar's Feast'; joined the Royal Society of British Artists on its foundation and exhibited there, 1824-1831,1837-1838; exhibited 'The Fall of Nineveh' at Brussels, 1833, bought by the Belgian government; elected a member of the Belgian Academy and awarded the order of Leopold by the King of Belgium; quarrelled with the British Institution, 1836; exhibited many works at the Royal Academy, 1837-1852, including many landscapes in water-colours; drew illustrations (with Westall) to Milton's Paradise Lost; worked on plans for improving London, including water supply and recycling of sewerage, 1827-1853; died, 1854.

Beautiful boy,
beautiful man,
asleep in a cradle,
a cradle of time.

Beautiful bird,
beautiful spirit,
caught on the hills,
wings of the light.

BALLAD OF THE INCENDIARY

‘My soul’s full of glory, which inspires my tongue,
Could I meet with Angels I’d sing them a song;
I’d sing of my Jesus and tell of his charms,
And beg them to bear me to his loving arms.’

With his fiery red whiskers
and eyes burning with rage,
Jonathan Martin broke out of his cage
to set York Minster ablaze.

Selling pamphlets of his life
so his dreams would always shine,
his lips to the tips of an angel’s wing,
he said he’d brought the sun.

He told the ‘Lord’s Folk’ around him,
those Citizens of Devilish Mind:
‘Hell is opening to take you,
ye blind leaders of the blind.’

When half-past two o’clock struck,
he lighted up his fires
and this crazy Incendiary of Unsound Mind
ignited his wildest desires.

And it’s blood, fire and smoke,
long may you Beef-eaters choke.
You serpents and vipers of Hell,
in flames your Minster I burn.

‘Lord what a wretched land is this,
that yields us no supply.
No cheering fruits, no wholesome trees,
nor streams of living joy!
But pricking thorns through all the ground
and mortal poisons grow;
and all the rivers are found
with dangerous waters flow ...............

Long nights and darkness dwell below,
with scarce a twinkling ray;
but the bright world to which we go
is everlasting day.’

And its blood, fire and smoke,
long may you Beef-eaters choke.
You serpents and vipers of Hell,
with flames your Minster I burn.

Jonathan Martin (1782–1838) was an English arsonist, famous for burning down York Minster in 1829.
Martin was born at Highside House, near Hexham, in 1782, one of the twelve children of William Fenwick Martin and Isabella, née Thompson. Among his siblings was the artist John Martin and the philosopher William Martin.
Martin was arrested on February 5 1829, and tried at York Castle.  Despite the jury ruling guilty (which would have resulted in hanging), the judge declared him not guilty on the grounds of insanity. He was detained in Bethlem Royal Hospital where he died on May 26, 1838. His son, Richard, was brought up by Jonathan's brother John, but young Richard committed suicide three months after his father's death.

The John Martin Heritage Festival
Martins ... @ Anchor
Thursday 6 October 2011 from 8pm
The Anchor Hotel, John Martin Street, Haydon Bridge, NE47 6AB
‘This was the John Martin Heritage Festival celebration for ‘National Poetry Day’ inspired by the life and work of John Martin and his brothers Jonathan and William in poetry, music and song. It was presented by the north‘s leading living poet (and Martin scholar) Dr. Keith Armstrong, with ex Whisky Priests singer/songwriter/guitarist Gary Miller and renowned Northumbrian piper Chris Ormston.  It was a wonderful and diverse entertainment with something to please everyone.‘  (Henry Swaddle).

William Martin (1772–1851) was an eccentric and self-proclaimed philosopher, born on 21 June 1772 at the Towhouse, Haltwhistle, Northumberland, the eldest of four sons of William Fenwick Martin (died 1813), who held several occupations including tanner, publican, coach builder, and fencing master, and his wife, Isabella (died 1813), daughter of Richard Thompson, a farmer.
William's early years were spent with his maternal grandparents near Haydon Bridge, and he accompanied them when they moved in 1775 to a farm in Kintyre. When his grandparents died he went to live with his father, then foreman of a tannery at Ayr. In 1782 father and son returned to Northumberland. Martin is next heard of working in a ropery at Howdon Dock, and in the following year he joined the Northumberland militia at Durham. Discharged in 1805 Martin, an able mechanic, was granted a patent for improvements to shoes, and began taking an interest in perpetual motion machines.
In 1808 Martin went to London where he exhibited his Eureka perpetual motion machine, which was apparently simply a pendulum driven by a concealed current of air. In the following year he returned to his modest trade of rope making, and in 1810 to the militia. In Ireland with his regiment he learned the elements of line engraving. Apart from his quackery and noisy absurdities Martin's skill brought him in 1814 the Isis silver medal of the Society of Arts for his spring weighing machine with circular dial and index. In the same year he married, describing his wife only as ‘an inoffensive woman, respected by rich and poor, and a celebrated dressmaker’. They settled first at Newcastle upon Tyne, then at Wallsend, where, supported by her earnings, he was able to concentrate on his multifarious inventions until her death on 16 January 1832.
From 1849 William lived with his brother John at Chelsea, where he died on 9 February 1851.