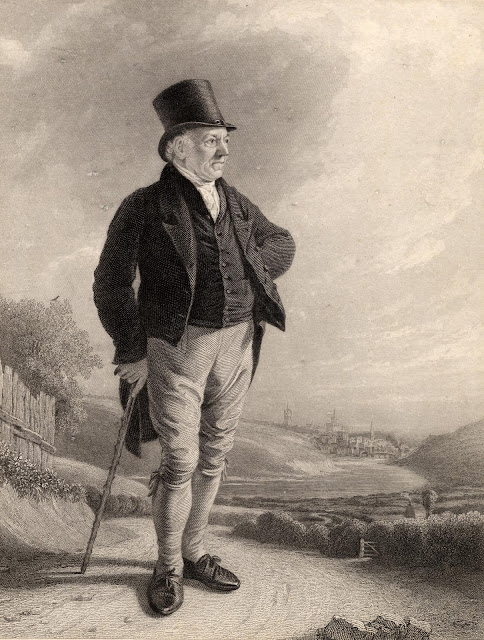 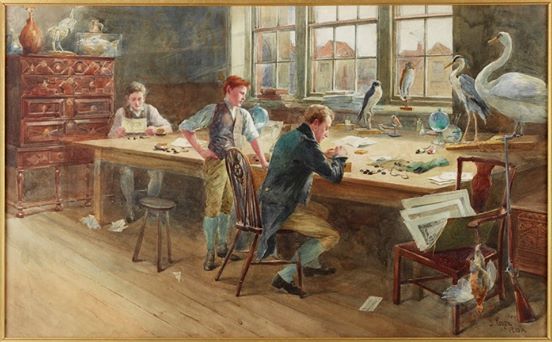 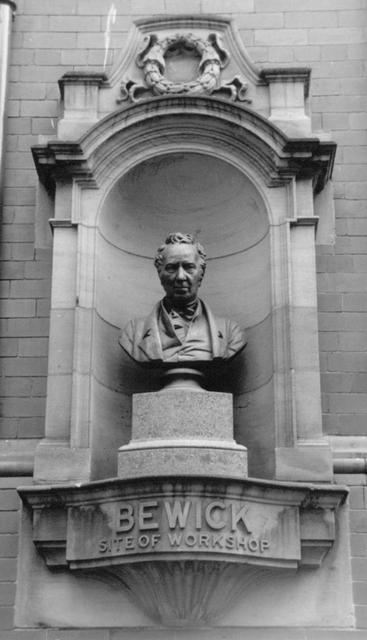 The starlings en masse
roost here now.
They blend with the dark trees
in the twilight
by Bewick's shadowy workshop.
Under the Cathedral spire,


they shriek and gossip


I think that Thomas


you could speak to birds,


knew them as you drew their words


in woodblocks.
You coaxed them from their very eggs,
uncaged them -
let them sing on the page.

London
Depressed you
with its ‘blackguard places’,
its streetwalking ways.
They called you ‘Scotchman’
and you itched for home,
reading the Geordie papers
at the Hole-in-the-Wall.
And your heart trilled like a blackbird’s
when you rejoined your Whig mates,
putting a world to rights
in the Lion Lounge.

You were back
herding sheep in your roots,
smiling down to your boots
in that Brotherly Society
of Northumbrian cronies:
the wild fields
of Tyne.

Drawing
clear of the city,
you carved your name
in dogs barks
and birds cries.
Your infant eyes
kept seeing
the devils in bushes
and the gods
in thrushes.
You loved
to scratch a living.

Avoiding the faces
of strange places,
You dreamed of always
Being a boy,
A bird or a fish,
Awash in the light
Of a dark wood:
A cherry burn.


You spent your life
perfecting it,
crafty as a fox
forging a frantic path
across the fields.

To the sound of the Pipes,
you worked your way
to a quiet glade,
died contentedly
devising
‘tale-pieces’:

a tuneful ending
to a drawn-in-day.
WALK ON, TOM BEWICK

Stride Circus Lane
and chip your signature
on the pavement of scrapes and kisses.
pass the Forth
and skirt
its pleasure gardens;
throw your darts in the archery field.
skim the bowling green
and walk on water,
doff your hat to Mrs Waldie;
cut along
old scars of lanes
to the bloody gush of Westgate street;
whistle with birds
in a vicar’s garden,
let warm thoughts fly in Tyneside sun
to bless this Geordie day.
And greet
the morning hours,
Aunt Blackett and Gilbert Gray,
sing to free the world,
the Black Boy;
harmonise your mind
in a churchyard of melancholy.
Dance over the Lort Burn,
in the sun in your eyes,
flooding your workshop
with a light fantastic.
Your shoulders so proud
rub with the building girls
and lady barbers
along Sandhill;
the boats of your dreams
bridge the aching Tyne,
ships groaning
in the tender daylight,
longing for the healing moon;
a keelman’s fantasies
of quayside flesh
and the seething sea.
You trip along
searching for electricity and magnetism
in the inns,
winging it
with the bird catchers and canary breeders,
the dirty colliers and the harping whalers.
Walk on Tom,
execute
a portrait
of a hanging man;
let your strong heart
swell with the complex passion
of common folk.
Posted by Tynebard at Thursday, October 26, 2017

TELL ME LIES ABOUT NORTHUMBERLAND 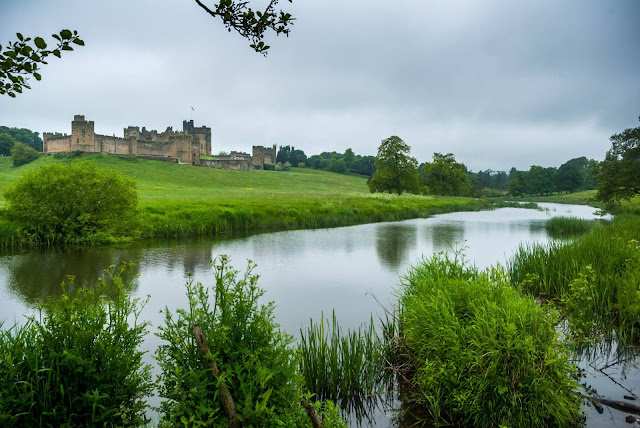 TELL ME LIES ABOUT NORTHUMBERLAND
(in honour of Adrian Mitchell)


Say this land is ours,
these pipe tunes do not cry.
The birds all sing in dialect,
old miners breathe like dukes.

Tell me it isn’t feudal,
that castles were built for us.
We never touch the forelock,
bend to scrape up dust.

Your pretty girls don’t stink of slaughter,
your eyes don’t blur with myth.
You’re as equal as a duchess,
saints never smell of piss.

Your roots are in this valley,
you were never from doon south.
You never hide your birthplace,
you’re a real poet of the north.

The churches are not crumbling,
the congregations glow with hope.
We are different from the foreigner,
our poetry rhymes with wine.

There is no landed gentry,
no homes locals can’t afford.
There’s no army on the moors,
the Romans freed us all.

That the hurt is in the past,
the future holds no war.
Home rule is at our fingertips,
the Coquet swims with love.

‘The Garden’ is our children’s,
Hotspur spurs us on.
The seagulls are not soaked in oil,
the cows are not diseased.

This Kingdom is United,
‘Culture’ is our God.
Everyone’s a Basil Bunting freak,
there’s music everywhere.

We will have our independence,
we’ll get the Gospels back.
We live off museums and tourists,
we don’t need boats or trades.

We’re in charge of our own futures,
we have north east citizens here.
In this autonomous republic,
we’re free as dicky birds.

So shut your eyes.

And tell me lies 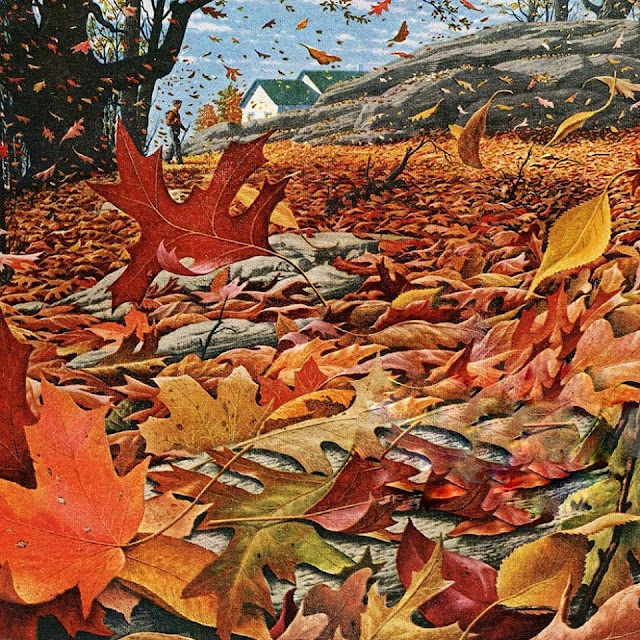 Unbidden autumn strews dunned-down gardens
With tree-shed tatters of summer passing,
Grey-boned boughs, by this rough undressing,
Are shrouded in mantles of mist again.
Children, armed with throwing sticks, set to then
To conquer horse chestnuts, wrest the blessing
Of their bristled fruit, and by amassing
Wins prove the hardness of the seed within.
Fallen apples perish beneath dense skies,
Wind snatched from blustered branches, while dankness
Saturates the chilled air. Encroaching night
Dulls this fading view in age wearied eyes
Looking out with quiet, resigned distress
At such incremental loss of the light. 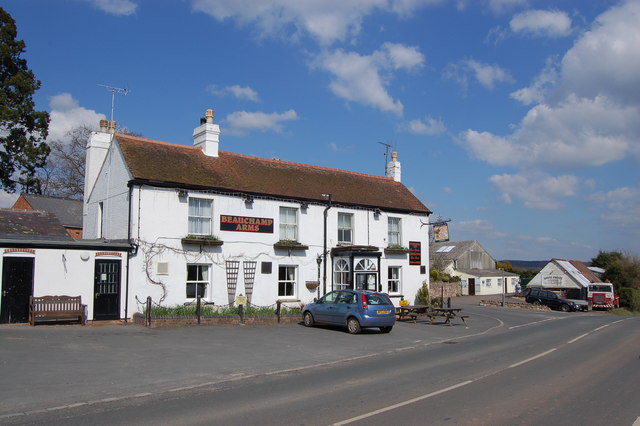 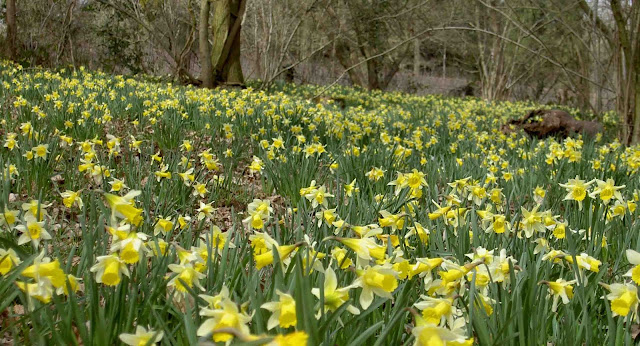 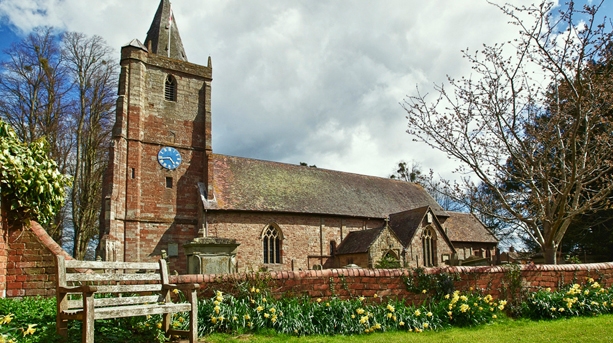 ‘Was it for nothing that the little room,
All golden in the lamplight, thrilled with golden
Laughter from hearts of friends that summer night?’ (Wilfrid Gibson)

I’m as happy as a daffodil
this day;
sunshine flows around me
over fences,
leaping
with the joy of my poetry.

I am Lord Pretty Field,
a tipsy aristocrat of verse,
become full of myself
and country booze
in the Beauchamp Arms.

Under branches frothy with blossom,
I carry a torch from Northumberland
for Wilfrid Gibson
and his old mates;
for Geraldine
I bear
my Cheviot heart
in Gloucester ciderlight.

We can only catch
a petal from the slaughter,
a bloom
to ease the melancholy
of a Dymock dusk;
hear laughter
over the gloomy murmurs
of distant wars.

A swirling rook cries out
across St Mary’s spire
in dialect
as I climb
back to my White House room
to dream of an England gone,
and a flash of whisky
with Abercrombie.

For Wilfrid you are still
‘a singing star’,
drenched in balladry;
and this I know:
I will keep your little songs alive
in this Golden Room in my heart
and, in my Hexham’s market place,
rant for you
and cover
all our love
with streaming daffodils.

‘Heather land and bent-land,
Black land and white,
God bring me to Northumberland,
The land of my delight.

Land of singing waters,
And winds from off the sea,
God bring me to Northumberland,
The land where I would be.

Heather land and bent-land,
And valleys rich with corn,
God bring me to Northumberland,
The land where I was born.’


Wilfrid Gibson, author of poems like ‘Flannan Isle’, ‘The Ice Cart’, and ‘The Drover’s Road’, was born in Battle Hill Terrace, Hexham, on October 2nd 1878, the son of a Fore Street chemist. He grew up under the guidance of an elder sister who was responsible for much of his education.
Not much is known about his early years except for a distinct gift for language and a desire to be a poet.
His first book of poetry was published at the age of 24 and entitled ‘The Golden Helm’. Similarly romantic was his next book, ‘Urlyn the Harper’, published two years later. This was followed, in 1907, by ‘Stonefields’ which depicted the strength and atmosphere of Northumberland and the Borders, and then ‘Daily Bread’, issued in 1910, which went into a third printing, partly because of its down-to-earth style proving that there was a market for poems on everyday life which people could relate to. Gibson had ceased writing pseudo-Tennysonian verse and had begun to write realistic poetry in which he attempted to reflect the speech of ordinary people, based on events stemming from everyday life in Northumberland and eleswhere.
In the summer of 1912, Gibson left Hexham for London to broaden his literary horizons and never returned to his native town, except for very occasional visits. He moved to Dymock in Gloucestershire in 1914 to join a group of poets and his new bride went with him, Geraldine Townshend (secretary of poet Harold Munro of the Poetry Bookshop in London), who he had married in Dublin in December 1913. One of the Dymock Poets, the American Robert Frost, said of Gibson that ‘he is much talked of in America at the present time. He’s just one of the plain folks with none of the marks of the literary poseur about him’. The poet Rupert Brooke affectionately nicknamed him ‘Wibson’.
He was turned down by the Army because of his shaky health and poor eyesight but was recruited to the war effort in 1917 when he served as a clerical worker in the Army Service Corps. Shortly beforehand, he had embarked upon a successful reading tour of America.
In war and in peace, he tried to capture the lives of ordinary people and he acquired a reputation as a poet who identified with the urban poor and who understood the harshness of the lives of working people, what he called ‘the heartbreak in the heart of things’.
‘Wibson’ continued to publish a selection of poems every two years or so until 1950 and he still went on reading and lecturing tours around Britain, despite money problems and the aches and pains of rheumatism and fibrositis. But his work declined greatly in popularity and is scarcely known today.  He had written to Robert Frost in 1939 that ‘I am one of those unlucky writers whose books have predeceased him’.
He died at Virginia Water in Surrey in a nursing home on 26th May 1962, aged 83.

Inscription by W.W.Gibson on north side of The Temperley Memorial Fountain of 1901 in Hexham Market Place