From the Blackboard of Darkness 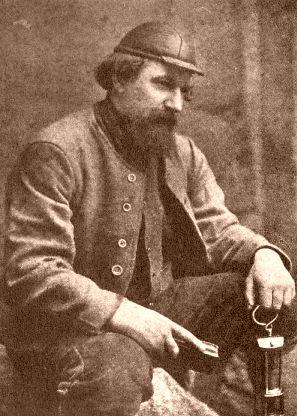 
Unlettered pit-boy out of Percy Main,


With the lamp of his imagination.


Hewer of knowledge from the dust and gas,


Picker of words from amongst cobs of coal,


Drawing on fossils of creation


With a stick of chalk. Then his poet’s soul


Took wing, flying up and out of the shaft,


His tongue no longer tainted by the damps,


Though never lost the taste for those who graft


In the petrified colons of the earth,


Pressed between floor and roof into the cramps


Of crevices, when every shift could be


The very last for all eternity.


His verse – their voice, their words – his poetry.


Balladeer for those who had no reason to rhyme,


Who had no talent for pens, had no time


To make their marks on paper, a collier


Working those rich seams of community,


Willing to dig deep and ever deeper.


When the roof fell in, when the beam broke free,


He told the tale with truth and strict metre.


Returned to the Tyne where, to the theatre 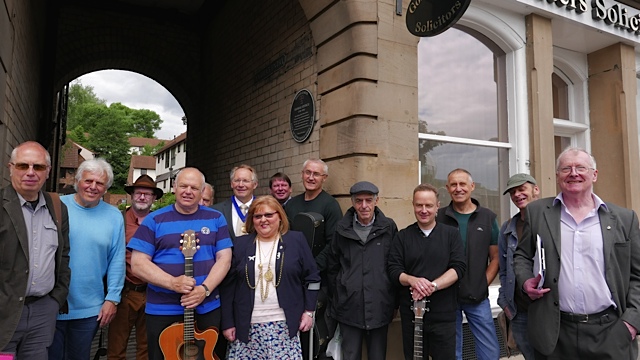 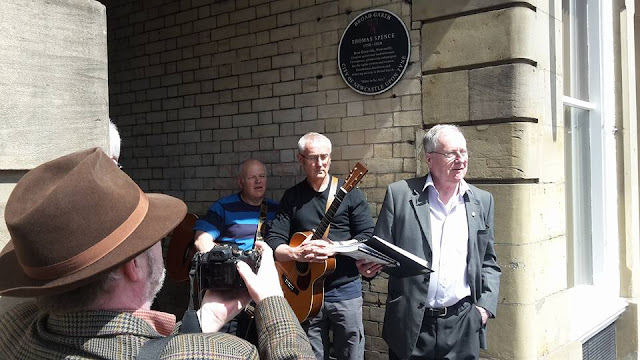 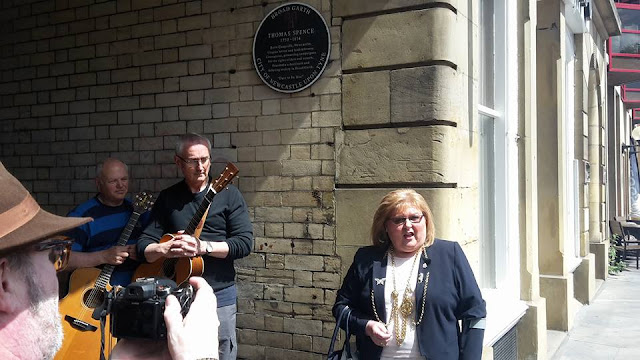 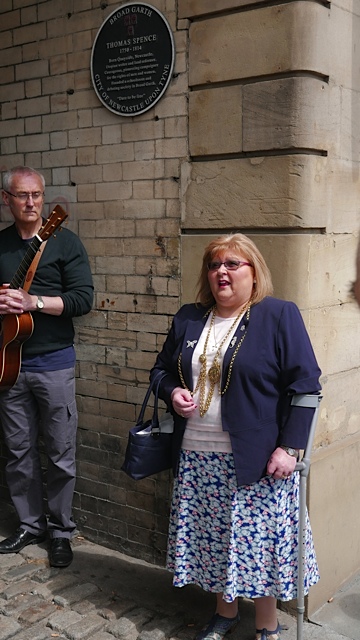 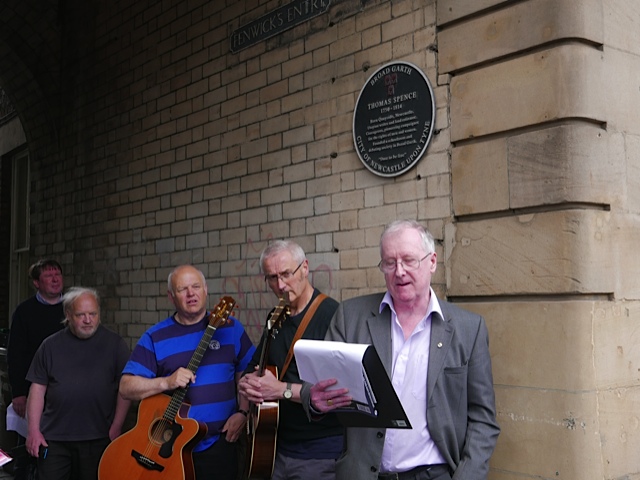 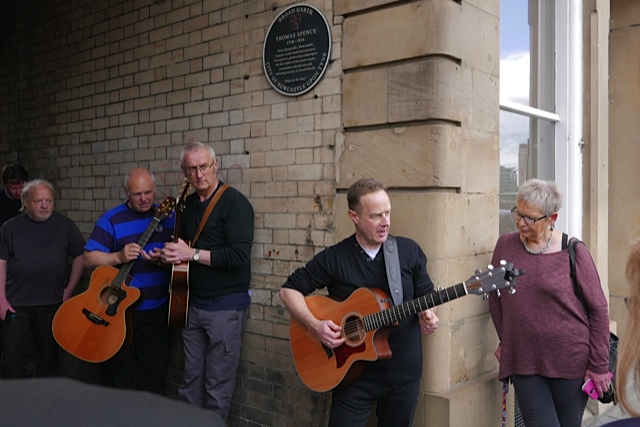 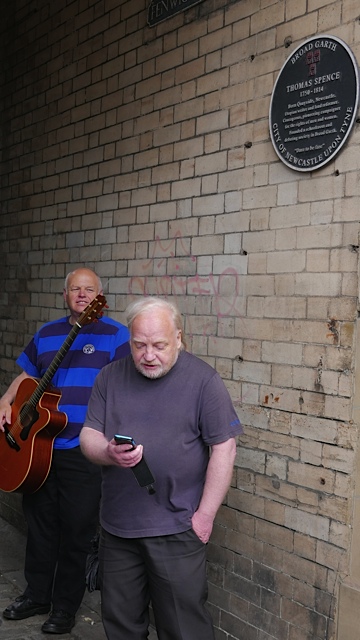 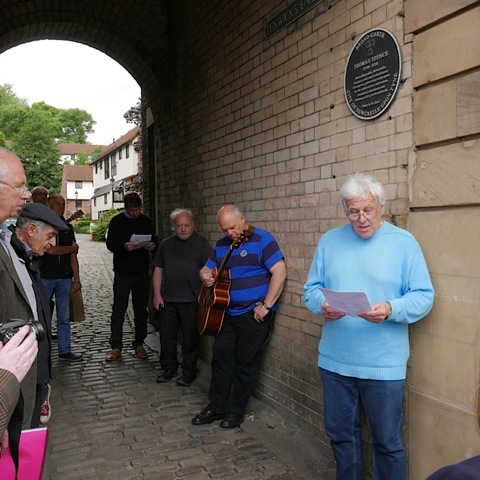 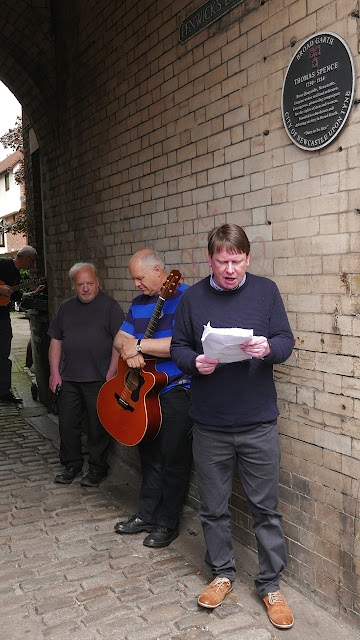 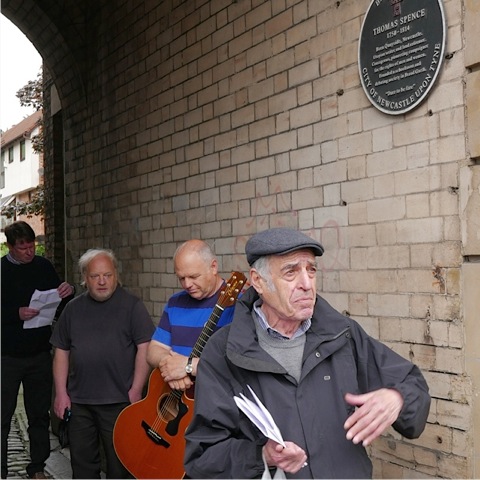 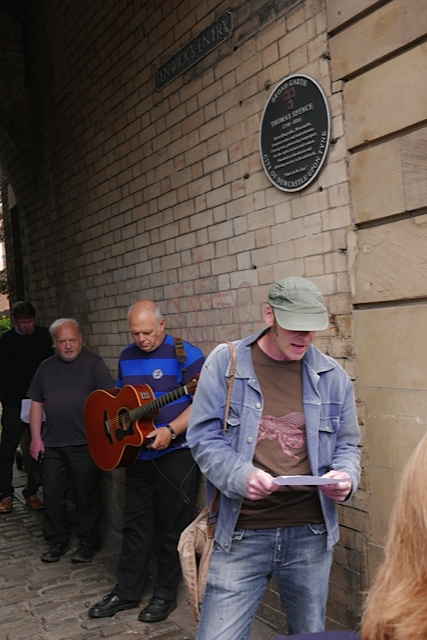 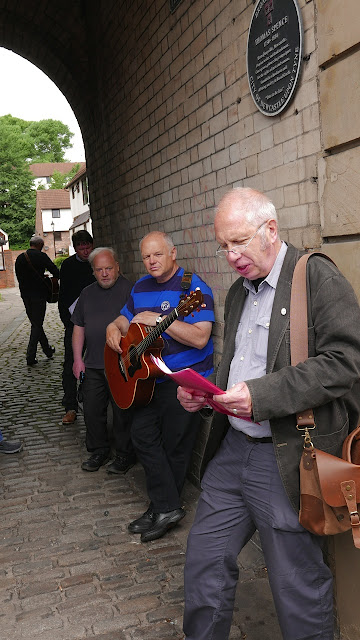 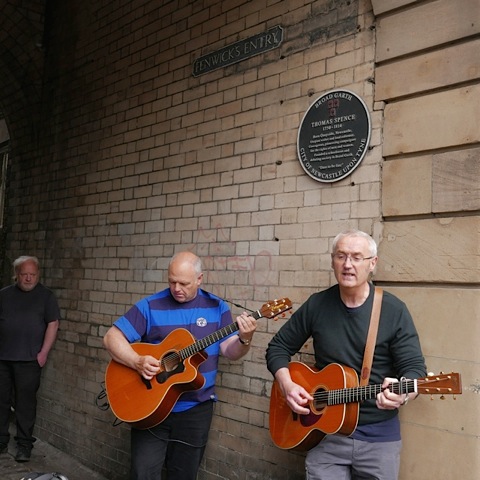 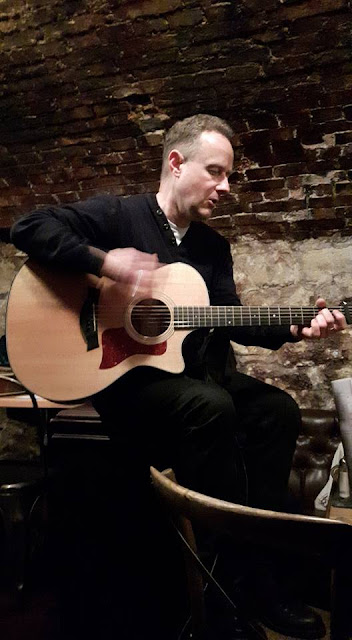 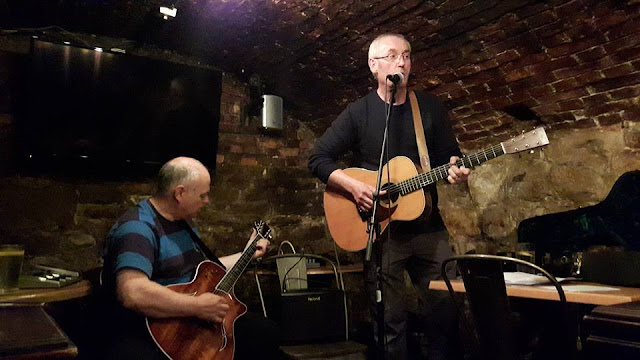 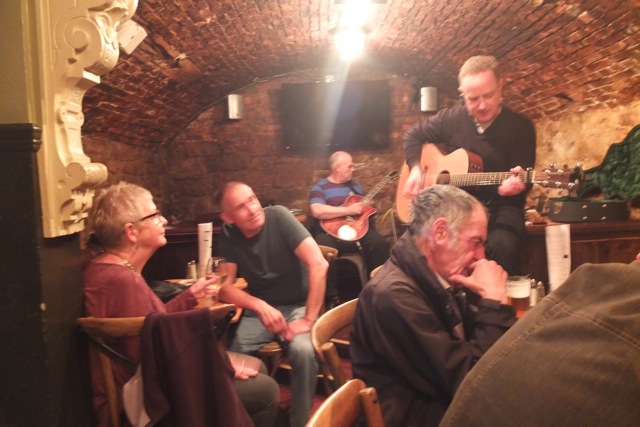 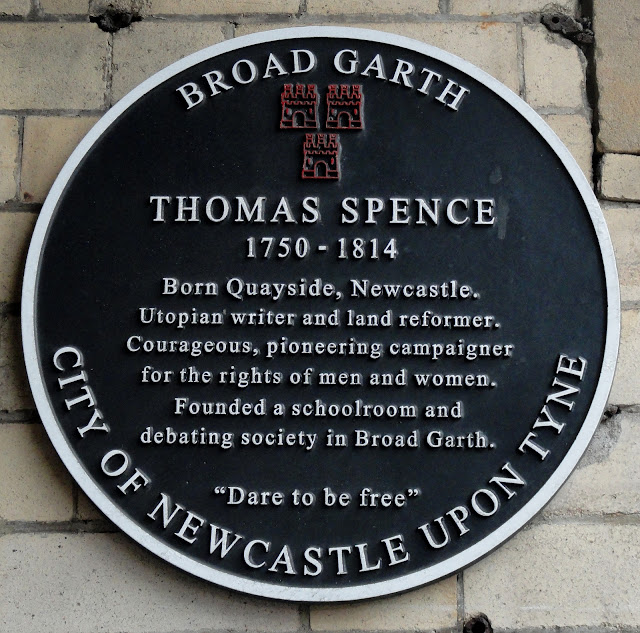 A FILM WILL BE MADE OF THE POETRY AND MUSIC.

FOLLOWED BY DRINKS IN THE CELLAR BACK ROOM, THE RED HOUSE PUB, SANDHILL, NEWCASTLE FROM 12.30PM WITH INFORMAL READINGS AND SONGS IN HONOUR OF SPENCE'S BIRTHDAY - AND, INCIDENTALLY, THAT OF KEITH ARMSTRONG!
FURTHER INFORMATION: TELEPHONE 0191 2529531.

ORGANISED BY THE THOMAS SPENCE TRUST


It’s good to welcome the establishment of The Thomas Spence Trust, founded by a group of Tyneside activists intent on celebrating and promoting the life and work of that noted pioneer of people’s rights, pamphleteer and poet Thomas Spence (1750-1814), who was born on Newcastle’s Quayside in those turbulent times.
Spence served in his father’s netmaking trade from the age of ten but went on later to be a teacher at Haydon Bridge Free Grammar School and at St. Ann’s Church in Byker under the City Corporation. In 1775, he read his famous lecture on the right to property in land to the Newcastle Philosophical Society, who voted his expulsion at their next meeting.
He claimed to have invented the phrase ‘The Rights of Man’ and chalked it in the caves at Marsden Rocks in South Shields in honour of the working class hero ‘Blaster Jack’ Bates,  who lived there.
He even came to blows with famed Tyneside wood engraver Thomas Bewick (to whom a memorial has been recently established on the streets of Newcastle) over a political issue, and was thrashed with cudgels for his trouble.
From 1792, having moved to London, he took part in radical agitations, particularly against the war with France. He was arrested several times for selling his own and other seditious books and was imprisoned for six months without trial in 1794, and sentenced to three years for his Restorer of Society to its Natural State in 1801.
Whilst politicians such as Edmund Burke saw the mass of people as the ‘Swinish Multitude’, Spence saw creative potential in everybody and broadcast his ideas in the periodical Pigs’ Meat.
He had a stall in London’s Chancery Lane, where he sold books and saloup, and later set up a small shop called The Hive of Liberty in Holborn.
He died in poverty ‘leaving nothing to his friends but an injunction to promote his Plan and the remembrance of his inflexible integrity’.
The Thomas Spence Trust organised a mini-festival to celebrate Spence in 2000 when it published a booklet on his life and work, together with related events, with the aid of Awards for All.
Trust founder member, poet Keith Armstrong has written a play for Bruvvers Theatre Company on the socialist pioneer which has been performed at St. Ann’s Church and other venues in the city.

A book 'Thomas Spence: The Poor Man's Revolutionary', edited by Alastair Bonnett and Keith Armstrong, was published by Breviary Stuff Publications, with launch events, in 2014, the 200th anniversary of Spence's death.


SPEECH BY DR KEITH ARMSTRONG AT THE UNVEILING OF  THE SPENCE PLAQUE IN 2010:

On behalf of The Thomas Spence Trust and Newcastle City Council, I’m delighted to welcome you here today to unveil a plaque in honour of that great free spirit, utopian writer, land reformer and courageous pioneering campaigner for the rights of men and women, Thomas Spence. Myself and other members of our Trust, especially Peter Dixon and Tony Whittle, with the support of people like Professors Joan Beal, Alastair Bonnett and Malcolm Chase and activists like Michael Mould, Alan Myers and Councillor Nigel Todd, have campaigned for well over 10 years for some kind of memorial to Tom Spence and it is with great pride that we assemble here with you today.
We know that Spence was born on the Quayside on June 21st 1750, 260 years ago to this the longest day and Summer Solstice. We know that his father Jeremiah made fishing nets and sold hardware from a booth on Sandhill and his mother Margaret kept a stocking stall, also on Sandhill, but it has not been possible, all these years on, to pinpoint the exact location of Thomas Spence’s birthplace, which is why this plaque has been installed here at Broad Garth, the site of his school room and debating society and where he actually came to blows with Thomas Bewick because of a dispute over the contentious matter of property. Bewick gave Spence a beating with cudgels on that occasion but, surprisingly enough, they remained lifelong friends. As Bewick said of Spence: ‘He was one of the warmest Philanthropists in the world and the happiness of Mankind seemed, with him, to absorb every other consideration.’
In these days of bland career politicians, Spence stands out as an example of a free spirit, prepared to go to prison for his principles - the principles of grass roots freedom, community and democracy, for the human rights of people all over the world.
Spence mobilised politically in taverns in Newcastle and later in London. That is why this afternoon, after this short ceremony, you are all invited to join us across the road in the Red House to raise a glass for Tom and to hear informal talks, poems and songs in his honour. You can hear further talks on Spence tonight at the Lit & Phil, courtesy of the Workers’ Educational Association, and next Monday at Newcastle Library, along with a display of his works, and, if you like, you can join some of us at Marsden Grotto, South Shields, tomorrow lunchtime, where Thomas first chalked the phrase ‘The Rights of Man’ on a cave wall, to raise another glass for this man who in his own words ‘dared to be free.’
This plaque puts Thomas Spence on the map for all of those pilgrims who hold human rights and political freedoms dear. It does not trap his free spirit rather it gives his life and work fresh wings.
Thanks to you all for coming this afternon on this proud day for The Thomas Spence Trust, Newcastle City Council and the citizens of this great city of ours.